When we leave the house every morning and get on the highway, what is the first thing we see on the road? Billboards? You guessed it! Of course, it’s not just billboards that are visible outside of our homes. Ads on public transportation, at the Houston METRORail, and on any free space advertisers are able and willing to purchase. We speak so often about digital media, social media specifically, and the huge impact it is having on marketing and the world in general, it seems only fair that we level out the conversation and discuss a bit about how other media advertising strategies (Out-of-Home advertising) are faring in comparison. 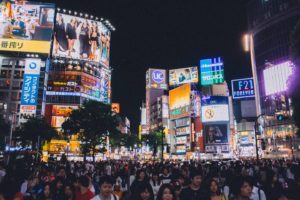 According to Wikipedia, Out-of-Home (OOH) advertising can be described as advertising that attempts to reach the masses while they are outside of the home, through various media from billboards to specified retail locations. That general overarching definition encompasses four main types of advertising: billboards, transit, street furniture, and alternative. Billboards are the advertising we are most familiar with in Houston as public transportation is not as prominent here as in other parts of the country. With that in mind, we will focus more of this discussion on billboard advertising.

So, now we know what Out-of-Home advertising is, but from when and where did it originate? Would it surprise you to learn that billboard advertising began in the time of the Egyptians? Amazingly, Egyptians used large stone monoliths to inform the public about treaties and laws. How’s that for an advanced civilization? In the United States however, billboard advertising did not originate until the 1830’s. It should come as no surprise then that this type of marketing is not going anywhere and in fact is growing at a steady rate in spite of advances in the digital space.

The numbers don’t lie. Out-of-Home advertising expenditures increased by 4.6% in 2015 leaving total expenditures at $7.3 billion for the year. This is an all-time high after 23 quarters of continuous growth. So, what does this say? First it says that, although digital media marketing is growing substantially, in fact slated to outpace TV ad spending by the end of 2016, Out-of-Home advertising still has a niche that is not easily filled by other options. Second, OOH now offers options such as digital billboards that are rich in data like other digital media. Lastly, although digital media ad spending may overtake that of traditional advertising media, it does not spell death for alternative avenues. Rather, advertising options like OOH will become more targeted and better able to provide analytics, as is already being implemented in some markets.

Think about this, consumers spend approximately 70% of their time outside of the home. Certainly digital media comes with consumers during the time they are out of their homes. Smartphones and other mobile devices have made that possible. What about when we are driving though? What about when we tire of looking at that tiny 5” screen? “Sure”, you may say, “that’s all fine and good, but people don’t pay attention to those signs.” Don’t they though? As much as we may want to ignore billboards and other OOH advertising, it is too prolific to ignore. Besides, as mentioned above, we should not look at our phones and drive, nor are we always looking at our devices. Out-of-Home advertising fills the gaps where consumers cannot be reached by other media, and the numbers prove it!